Compared to Trijicon RMR Type 2, Leupold Deltapoint PRO has better FOV and faster dot picking up speed, due to larger glass. Glass is also more clear, less tint and less distortion. Furthermore, Deltapoint PRO battery can be replaced without unmounting the optic, as opposed to the RMR. That said, the Deltapoint PRO has shorter battery life, even with its auto-off when idle and motion sensor activation. RMR can also withstand more abuse. Lastly the Deltapoint PRO is cheaper at the time of this writing.

Compared to Vortex Razor red dot, the Deltapoint PRO is better in most aspects, except warranties. Price of the 2 optics are around the same ballpark.

Leupold is a 5 generations, family-owned, well-known American optics manufacturer since 1907. Its products are used by organizations such as the United States Army, the Secret Service and the Navy SEALS. The Israel Defense Forces also use Mark 4 and Mark 6 Leupold scopes in their army.

What are the PROS and CONS of Leupold Deltapoint PRO?

Prior to the introduction of Leupold Deltapoint PRO, Trijicon RMR is the undisputed king of micro red dot sights, due to its reliability and ruggedness. Whether for occupational use, home defense or competition shooting, the RMR had a firm monopolistic grip.

Then came along the Deltapoint PRO, and a lot of people gave it a try due to enticing features and cheaper price. Today Leupold Deltapoint PRO has become a strong contender with overwhelming positive reviews.

My recommendation? Get this Leupold Deltapoint PRO if you want a micro red dot for competition and fastest target acquisition. But if the micro red dot is for military, SHTF situation, go for the RMR.

Best for : Shooters who want wide FOV glass for fast dot pick up during competitions.

Since no optics nor products exists in isolation. And words such as “crisp” and “great” dot don’t really mean much when you have no benchmarks. I’ll be comparing Leupold Deltapoint PRO with other red dot sights in similar price range, so you know what’s the best option for your money.

Read on to find out why Leupold Deltapoint PRO, even though impressive, isn’t a perfect red dot sight.

Leupold Deltapoint PRO 2.5 MOA dot costs about $400 (at the time of this writing). And I’ll be comparing it with :

These are 2 popular options in the market with similar price point and should give you a realistic feel of how good Leupold Deltapoint PRO really is.

Before getting to the comparison part, let’s familiarize ourselves with Leupold Deltapoint PRO first. The Deltapoint PRO has 25.7 x 17.5mm viewing glass with 8 brightness settings.

With the Deltapoint PRO, you have 2 options between :

Compared with Trijicon RMR (RM06), I found Leupold Deltapoint PRO to have larger and wider FOV glass. With this bigger glass, it’s noticeably quicker to pick up the red dot after recoil. The Deltapoint PRO glass is also clearer with less perceivable distortion. Furthermore the Deltapoint PRO has better natural color, as the RMR exhibits slight bluish tint.

Both optics are daylight bright and can easily be seen on bright sunny days and backgrounds. That said, the RMR is slightly brighter on highest settings.

On the other hand, the RMR dual-illuminated (RM03, RM04, RM05, and RM08), which do not require any battery, are not daylight bright in certain lighting situations such as very bright environment and when you’re standing in low light but your target is in brightly lit area,

Compared to Vortex Razor 3 MOA, the Deltapoint PRO glass is again clearer and has better natural color. Vortex Razor glass has slight distortion and bluish tint. Its dot is daylight bright. I’d rate the Razor slightly worse than the RMR.

Battery replacement can be done without unmounting

This is not the case with the RMR, as its battery compartment is located at the base and you have to unmount the red dot to change batteries. Thus you may have the hassle of re-zeroing every time your battery runs out.

Vortex Razor design has a battery tray on its right side, preventing a need of unmounting the optic to change battery.

Leupold Deltapoint PRO has significantly less battery life compared to the RMR. Luckily it has 5 minutes turn-off and motion sensors which can prolong your battery life to 3-6 months depending on your use.

As stated earlier, all 3 optics are daylight bright, with the RMR being the brightest. But there’s an issue with Deltapoint PRO’s control.

With the Deltapoint PRO, there’s only one button at the top of the optic to adjust between its 8 brightness settings. You turn on/off and increase/decrease brightness with just this single button.

Supposedly you had dimmed your red dot to “3”. Pushing the button again will make it “2”. Push again and it’s “1”. When the lowest (or highest) setting is reached, the LED will flash 5 times.

By holding the button for 2 seconds you will reverse the brightness adjustment direction. After reversing, pushing the button again will increase (or decrease) brightness instead, as in “2”. And “3”, “4”, “5” and so on.

A bit complicate, especially if you’re concealed carrying and can’t look at your red dot.

My personal advice when concealed carrying is to set it at its highest in the morning and also set each click to “dim” position. Then you basically adjust for dimming along your day. Another option is to find a middle-ground brightness level where you can compromise using in all environment and just leave it there.

Trijicon RMR and Vortex Razor are simpler to operate as they have separate “up” and “down” buttons. Plus Trijicon RMR has auto-brightness settings which auto detect ambient light and adjust brightness accordingly. I feel that the auto-brightness sometime is too dim, but work well in most situations.

Triangle style reticle uses its tip for precision aiming and its body for center of mass aiming. Most people are more familiar with round dot style as the triangle requires some getting used to.

Trijicon RMR has the most reticle types for you to choose from. But I personally recommend only the Adjustable LED type, as the LED and dual-illuminated type are not as reliable in certain lightings.

Height Must be Considered for Co-Witnessing

When mounted, the Deltapoint PRO will sit quite high such that normal front/rear sight will not be able to co-witness with it. There are aftermarket iron sights with extra height that fit well with the optic.

Leupold has its own rear iron sight that would co-witness and can be installed on the Deltapoint PRO. For front sight, you need to measure from the top of your slide to the bottom of the glass on the DeltaPoint Pro and add 0.065″ for absolute co-witness.

Trijicon RMR has no such issue. Vortex Razor has similar issue as the dot sits as high as Leupold Deltapoint PRO.

Leupold Deltapoint PRO’s parallax error is relatively small and you can make decent shots without a perfect cheek weld.

But if you’re serious about parallax error, a holographic sight will give you even less parallax error as it uses different underlying technology.

Leupold Deltapoint PRO is heavier and wider than Trijicon RMR. But it has significantly larger viewing glass. That said, the Razor has the largest viewing glass.

Durable in its class, Only 2 years warranty

Leupold Deltapoint PRO and Trijicon RMR are the 2 most rugged available micro red dot sight optic at the moment. For military, law enforcement, heavy duty and home defense where stakes are really high, these 2 optics are the absolute best, with RMR being the more rugged with better track record one.

I personally have a great run with all 3 optics and have no durability issues. That said, I’ve heard the number of failure rate for Vortex Razor red dot is higher than the Deltapoint PRO and Trijicon RMR. Thus, for any serious use, I recommend that you choose between the two.

Unfortunately, handgun’s micro red dot is relatively a new product niche. And its products aren’t fully developed. Due to its size and weight restraint, even the Deltapoint PRO and RMR have its fair share of failures unlike the bomb-proof optics of high end rifle red dot sights.

Recently, Aimpoint announced its new Acro P-1. Its emitter is fully enclosed in its tube and has a very rugged design. Even though I have no chance to test it yet, but Aimpoint’s bombproof products might be the solution to handgun’s micro red dot vulnerability. It’s worth a look.

For non-serious use however, Vortex’s edge has its edge on lifetime warranty. Here’s the warranty breakdown :

Admittedly, the best warranties are the ones that you *don’t* ever have to use them.

My Verdict of Leupold Deltapoint PRO

Compared to Trijicon RMR Type 2, Leupold Deltapoint PRO has better FOV and faster dot picking up speed, due to larger glass. Glass is also more clear, less tint and less distortion. Furthermore, Deltapoint PRO battery can be replaced without unmounting the optic, as opposed to the RMR. That said, the Deltapoint PRO has shorter battery life, even with its auto-off when idle and motion sensor activation. RMR can also withstand more abuse. Lastly the Deltapoint PRO is cheaper at the time of this writing.

Compared to Vortex Razor red dot, the Deltapoint PRO is better in most aspects, except warranties. Price of the 2 optics are around the same ballpark. 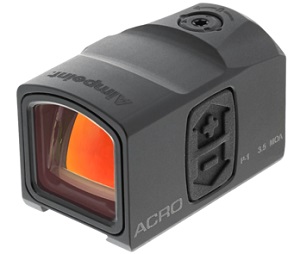